Maps have always been an important part of any culture, whether for conveying information, power, or beauty. Well-known maps of the 18th and 19th centuries were etched into copper plates, stamped on paper, and color hand applied.  These maps were carried by great explorers and adorned the walls of castles.  They represented a perfect synthesis of beauty and information. That combination of intellect and aesthetic is rare in maps produced today.

Our company, New World Cartography, has taken this old approach of originally designed, hand-colored maps and applied it to the 21st-century world.  Each map expresses the skill of hand-drawn lines and text and shows the brilliance of hand-applied coloration.  All of this is done to a map that was conceived of by our craftsman…an original spatial expression of the world around us. Some tell the story of history (Charleston Fortifications) while others describe the world around us (Charleston Metropolitan).

The custom map prints designed by New World Cartography are the product of three talented individuals. Their unique backgrounds have come together in this cartographic endeavor to produce originally designed, hand-colored maps.
Although his academic training is as a biologist, Travis has always had a love of looking at the world from above. Maps, whether old or new, give a unique view of the world around us. He has also appreciated the craftsmanship required to produce the great maps of the 17th and 18th centuries. New World Cartography is his effort to describe the world around us today in much the same way map makers used hundreds of years ago. Each map is conceived of and designed by Travis. Some, like the Revolutionary and Civil War Fortifications of Charleston Harbor, require hours of research.
Tony has been pursuing artistic endeavors his entire life.  Although academically trained at Furman University, his first artistic creations were made while growing up in the Lowcountry of South Carolina.  His work with New World Cartography covers initial ink work for originals drawings of each map to the final coloration that is applied to most maps.  In fact, cartographic pursuits run through his family. The State of South Carolina map by New World Cartography is loosely based on a map produced by Tony's great uncle in the early 20th century while a boy growing up on Johns Island, SC. Take a look at this historic map here.

For as long as he can remember, Ben has been making all kinds of maps, from facsimiles of medieval mappa mundi to completely dreamt-up fantasy maps.  He studied history in his recently completed undergraduate degree from Kenyon College.  His senior thesis addressed methodology and sourcing in the early 16th-century Ottoman cartography.

We hope you enjoy these original, custom map prints and they become valued pieces in your family’s home. Feel free to check out our website often where we will be revealing new maps as we develop them and passing on interesting cartographic information. 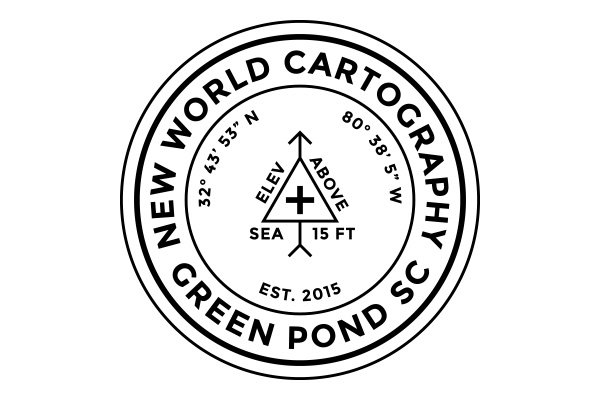